Kasaan is on the east side of PoW on Kasaan Peninsula. Approximately 60 people live ithe village. It is connected to the PoW highway system via a 17 mile improved gravel road. There are plans to pave the road in the future. OVK is approximately 25 miles from Thorne Bay, 50 miles from Klawock, and 70 miles from Hollis.

Old Kasaan is where the initial migration of Haida peoples from Haida Gwaii (Queen Charlotte Islands) to PoW occurred in the 1700’s. Haida relocated to the current location of Kasaan, several miles from Old Kasaan), to where a mining camp, sawmill, post office and later a salmon cannery were built. Kasaan’s totem park is located along Kasaan Bay and can be reached along a well maintained forest trail. The Whale House, the only traditional standing Haida longhouse in the US recently has been restored by OVK and Kavilco Inc., a native corporation. The longhouse previously had been restored in the late 1930’s by Civilian Conservation Corps carvers.

OVK has the following services: school, emergency medical services (EMS), boat launch, flights (floatplane), lodging, restaurant, RV services, and library, among others. It is connected to other PoW communitiesby an improved gravel road that connects to PoW’s paved road system and to scheduled daily Inter Island Ferry (IFA) service to Ketchikan at the Hollis terminal. 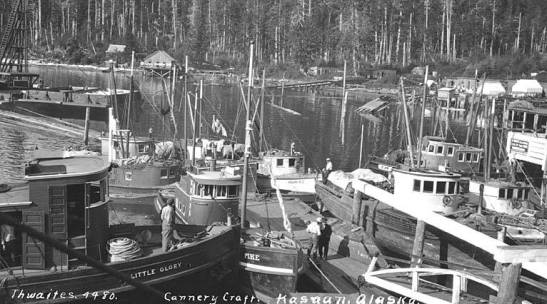 Village of Kasaan; a Historical Perspective

Salt Chuck Mine: bornite to palladium